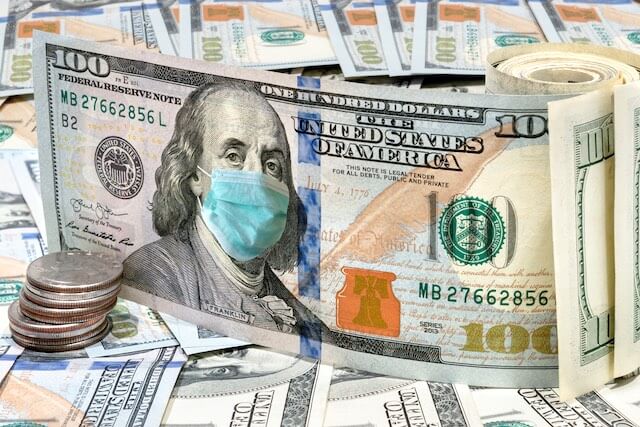 Are all the negativities that you hear when you turn on the news, read news articles on your devices, or computer or what you hear on social media making you anxious?

The news media is continuously reporting on the coronavirus and some argue that it is causing panic behavior for many individuals. CNN has had its biggest audience for any three-month period in the network’s 40-year history. Fox News Channel and MSNBC also had record-setting quarters ending in June.

All the news can also cause mayhem on your willingness to stay invested and make good investment decisions. This is not unique because there’s always a headline or a reason not to invest.

Despite negative news we have seen growth throughout these times. History cannot predict what is going to happen in the future but looking back pretty much every time something happens and rocks the markets, people are out there saying: “This time it’s different. The market can’t hold on with this crisis,” yet time and time again despite new crises happening we see markets rebound and recover.

The Hartford Funds published a white paper that provided data from various negative periods in the past which looks at negative news and what’s happened with the growth of money since then. The data went as far as the 1970’s. Below are the findings:

In 1970 the stock market return (S&P 500 index) grew by 3.9%. Not a good return and those that were paying attention to the headlines then were probably saying this is not a good time to invest. If you would have invested $10,000 at the beginning of 1970 and held it through the end of 2019 your investment would have grown to $1,530,989. Despite investing in a recession, the time in the market created a massive growth in that time period.

In 2010 the stock market (S&P 500) gained 15.1%. Many people were choosing not to invest because they were still spooked by the Great Recession Financial Crisis that lasted 16 months between 2007 and 2009. Many people are still traumatized by that and decided to get out of the market and then never got back in, locking in their losses. If you had invested $10,000 at the beginning of 2010 and held it through to the end of 2019, your investment would be $35,666.

Sources: Morningstar and Hartford Funds, 2/20. This table assumes an initial investment of $10,000 in stocks (represented by the S&P 500 Index) at the beginning of the period (January 1) and held through the end of the referenced period (December 31). Results will vary for other time periods and investment strategies. Assumes reinvestment of dividends and capital gains and no taxes or transaction costs. The S&P 500 Index is a market capitalization-weighted price index composed of 500 widely held common stocks. Past performance does not guarantee future results. The index is unmanaged and not available for direct investment. For illustrative purposes only.

Now here we are in 2020 at the midst of the coronavirus outbreak. There is so much uncertainty we are faced with every day. We don’t know what’s going to happen after the coronavirus pandemic. We have an election year bringing us a volatile political climate. We are still faced with tensions in the Middle East. What will happen if we put $10,000 in the stock market now and where will it be in 2 years, 5 years or a decade from now?

We need to understand that negative news headlines happen all the time, all throughout history of investing and the stock market. They will continue to make us uncomfortable but don’t let this fear prompt you to make wrong investment decisions. Your investment decisions should be based on your comfort level with risk and the timeframe you will need to rely on them for income.

A recession is a declining period of economic activity, as reflected by two consecutive quarters of declining GDP. We are in a recession now having experienced a significant decline in economic activity across the economy, reduced industrial production and wholesale – retail sales, declining wages, pay-cuts and furloughs. Our unemployment numbers are not good. In June the unemployment rate fell to 11.1% after skyrocketing to 14.7%. Most of the unemployed were laid off to limit the spread of the COVID-19 pandemic.

A recession is not the same as a bear market. The stock market is based on expectations in where the economy is going in the future – anywhere from 4 months to 12 months out.

By contrast the economic recessions or expansions are not identified until after they have begun. The stock market is forward looking, and recession indicators are backward looking as a result of the data that has been collected.

The opposite of a recession is an expansion. An economic expansion is an increase in the level of economic activity, and of the goods and services available.

We have had twelve recessions since 1945. On average they appear every five years. Up until February 19, 2020, we have been in an expansion for over ten years, a very long time. The last recession was the Great Recession which began in 2007 and ended in 2009 and was the longest period of a contraction since the Great Depression of 1929 – 1939. Deeper recessions are often followed by stronger recoveries, while longer and stronger expansions are not followed by deeper recessions, according to data published from the Federal Reserve Bank of Cleveland.

In contrast, non-cyclical stocks (defensive stocks) generally have less exposure to economic cycles. These sectors commonly comprise suppliers of essential goods and services – such as pharmaceuticals, utilities and consumer staples – that consumers cannot forgo even during difficult economic times.

Even in recessionary periods most people will find a way to purchase food, hygiene products, and every-day essentials. All though not an essential, alcohol and tobacco products are often included in this category. Examples of defensive stocks are Proctor & Gamble, Campbell Soup & Microsoft, as we continue to purchase toothpaste, paper towels, cleaning products, soup and especially in today’s virtual world, work from our computers. Some of the leaders in the stock world in the Coronavirus pandemic are Nvidia, Abiomed, Advanced Micro Devices, PayPal, and Amazon.

The important thing to be aware of is that diversity is key. Being well diversified no matter where you are on the spectrum of risk is paramount in investing through all market cycles. Investing everything in a certain segment of the market can be dangerous. Especially in a crisis, you want to be diversified because not all sectors are going to respond to a downturn or expansion in the same way.

If you are uncertain if your portfolio is diversified in a way that meets your comfort level with risk, and would like us to review it, please don’t hesitate to contact my firm.

Franklin Planning takes no responsibility for the current accuracy of this information. Securities offered through J.W. Cole Financial, Inc. (JWC) Member FINRA/SIPC. Advisory Services offered through J.W. Cole Advisors (JWCA). Franklin Planning and JWC/JWCA are unaffiliated entities. Securities are not FDIC insured or guaranteed and may lose value. Investments are not guaranteed and you can lose money. This presentation is for educational purposes only and is not an offer to buy or sell an investment. Neither Franklin Planning and JWC/JWCA are tax or legal advisors and this information should not be considered tax or legal advice. Consult with a tax and/or legal advisor for such issues.